On Sunday 11 September 2016 disaster struck again in Foulpointe, a small coastal town in eastern Madagascar. For the second time since 2009 a fire broke out and destroyed many of the traditional houses, which in this region are roofed with thatch made of the fronds of the traveller’s palm (ravinala madagascariensis), known locally as falafa.  The Anglican priest in Foulpointe, the Rev. Tongasoa, was one of the many made homeless by the fire.  He has opened the Anglican church of Foulpointe to house five families, but the church building itself can only offer rudimentary shelter: in 2014 it was destroyed in a cyclone.  St. Alban’s donated money then to provide building materials for the church, and at least in the meantime  a new roof has been built.  However, the  families now housed there have lost everything; in particular they need cooking utensils, and of course the means to rebuild their houses.

That is why ACAMA, the association of Malgache Anglicans in Alsace, is organising a Soirée Caritative on Saturday 5 November 2016 in the Salle des Fêtes du Baggersee at lllkirch. (see attached flyer). 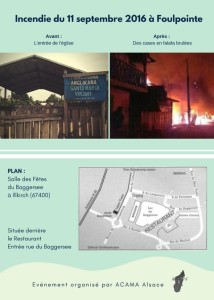 Starting at 21.00h there will be music (provided by Hazo Ala) and delicious Malagache food.  All are invited to attend and combine having a good time with supporting a fellow Anglican community.  Donations are welcomed to ACAMA (details below), tax receipts are available if required.

The Anglican Church of the Virgin Mary in Foulpointe is very dear to the hearts of the Malgache Anglicans in Strasbourg, as Foulpointe (originally known as Hopeful, then Walk-on Point) was where the first Anglican missionaries to Madagascar landed in 1864. The Rev. William Hey and the Rev. John Holding of the S.P.G. (Society for the Propagation of the Gospel) were in their mid-twenties when they arrived. Hey set up a small Mission church in a village 12 miles south of Tamatave, on the eastern coast, where today there is a stele of remembrance, and with Holding translated parts of the Book of Common Prayer into Malagasy.

“Hey died soon from the effects of the climate and the hardships to which he was exposed; and Holding, after repeated attacks of fever, had to return in 1969 to England permanently … For several years Holding was the only ordained missionary of the Church of England, ‘clergyman, schoolmaster, musician, printer, doctor and general manager; and yet he made good progress.  (http://justus.anglican.org/resources/bcp/Muss-Arnolt/part6a.htm)

As Voahangy Ramanajatovo, the Anglican Malgache Worship Leader in Strasbourg, writes: “We wish to continue to help this church exist which is a part of the religious heritage of the Anglicans in Madagascar”.