Half an hour earlier than usual, seated far apart in long rows in the middle of the church, hands disinfected, masks on faces: Trinity Sunday at the Dominicans was very different from usual.  The main thing though was that for the first time since 15 March St. Alban’s was able to congregate again to celebrate the Holy Eucharist. 43 people, adults and children, attended the service which was shorter than usual, and accompanied by George Temeso on the  drums. Instead of forming a circle around the altar to receive Holy Communion, we filed up one side aisle to receive a wafer from Mark at the altar steps, and returned to our seats down the other aisle.  In his sermon Mark referred to the memorial to Sir Robert Shirley in the church of the Holy Trinity in Stanton Harold, Leicestershire, which he founded in the aftermath of the English Civil War.  He had “done the best things in the worst times, and hoped them in the most calamitous.” That could be our guideline, Mark said. 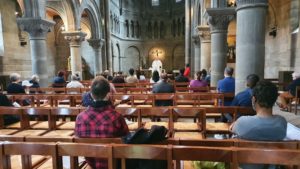 Back together again at the Dominicans.

At 5 pm on Zoom there was a service of Evensong for all those who  were unable or unwilling to come to church for the morning service, led by John Murray.  In future other members of the ministry team will also lead this service every Sunday.