This coming Sunday, 23 January, will feel very different for all those used to coming to the Église des Dominicans for St. Alban’s Sunday worship.  Instead of the usual service of Holy Eucharist at 10.30h the congregation of St. Alban’s will be joining its French Protestant and Roman Catholic neighbours for an ecumenical service to mark this year’s Week of Prayer for Christian Unity. This will be held at 10.30h – same time! – at the Eglise protestante de Saint-Matthieu, 97 blvd d’Anvers, near the F tram stop Place d’Islande.  Here we shall also be joining forces with the Catholic congregations of Christ Ressuscité/ Très Sainte Trinité; there will be a special programme for children.

The theme of this year’s service was chosen and prepared by the Council of Churches of the Middle East:  ‘We observed his star at its rising and have come to pay him homage.’ Matthew 2.2

Please don’t hesitate to come and join us at St. Matthieu, it will be a new experience for everyone and, we hope, the start of good things to come!

No Anglican service at the Église des Dominicains that day ! Faith in a Conflicted World is a 5-part mini-film series from Justin Welby, the Archbishop of Canterbury.  He believes that reconciliation is the call on every human being.  To reconcile means to become friendly with someone after estrangement,  to settle a quarrel or difference. It also can mean making two apparently conflicting things compatible or consistent with each other.  Justin Welby’s programme is called “Difference” and is about building bridges in a time when opinions and politics are becoming more and more polarised.

This is a good video to watch to find out more:     https://www.youtube.com/watch?v=piNdJ9PKzLE

St. Alban’s has set up an online discussion group to watch the five-part mini-film series together and then reflect upon each film’s implications for ourselves and our church life.  The next sessions are on

We can have good relationships even when we disagree – in fact, relationships are strengthened when we are able to negotiate conflict well.

On Youtube one can also watch the recordings of a webinar series called Difference which is part of the programme of  Faith in a Conflicted World: here is the introductory video: https://www.youtube.com/watch?v=D1hai2ZLtm4

Our online skills are going to be tested on Sunday, 21 March at 14.30h, when we gather behind our computer screens for this year’s Annual General Meeting.  However, in view of all the online meetings this church has held in the last year – from Sunday services via church council meetings to prayer and study gatherings – it is really only a small step further to invite all church members to participate in our General Meeting.  This is when we elect our churchwardens and council members, look back at the events of the past year and forward to the path ahead.

Of course, not everyone has the opportunity to take part in these Zoom meetings, either because the internet connection is bad or because the devices (and possibly self-confidence) are lacking. So if this is the case for you, please don’t feel you cannot take part at all.  Contact fr. Mark (07 71 13 38 83) or one of the churchwardens,  Pauline Dif (06 76 80 30) or Anny Samuels (06 67 57 20 56), to arrange for you to join a small gathering of virtual participants, ensuring proper social distancing and safe health measures. 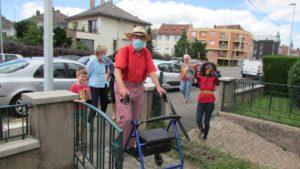 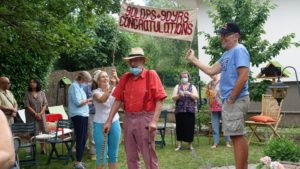 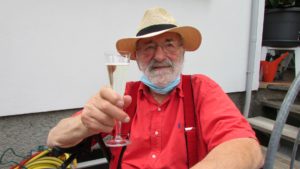 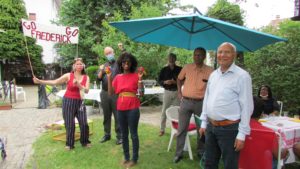 On 2nd June, the day after Pentecost, Frederick started on his 90-lap walk around the perimeter of his house in order to raise money for St. Alban’s charitable wing, ACAS.  In a short ceremony he was sent on his way by St. Alban’s priest Mark Barwick and other enthusiastic supporters.

Now, three weeks later, he has completed well over 70 laps, that is more than 7kms / 4 miles, and he is still going strong.  His goal of 90 laps is now well in sight. No mean feat considering his age – he turned 90 this year, hence 90 laps – and his reduced mobility after a recent foot operation.

The response so far has been all that he has hoped for: €2900 have already been pledged and more has been promised.  That means that ACAS (Association caritative anglicane de Strasbourg) will be able to continue supporting its long-term projects: caring for refugees in Strasbourg, educating Christian school children in Pakistan, and supporting an Anglican church in eastern Madagascar which has repeatedly been harried by hurricanes.

All are asked to continue supporting Frederick with both encouragement and donations as he completes his 90 laps and tots up the grand total of 9 km. 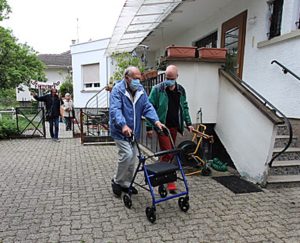 Through the garden, round the side of the house and along the pavement outside = 1 lap 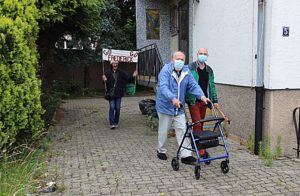 Frederick walking in mid-June with the support of physio Stéphane and cheered on by Chantal.

Frederick and Maryline William-Smith have been inspired by the UK’s 99-year-old Captain Tom, who walked around his
garden with his walker to raise funds for the UK National Health Service. Frederick, by comparison a mere chicken at 90, had to have a toe amputated in March and since then has slowly but surely been recovering his mobility. He now feels up to the challenge of walking 90 steps through the front and back gardens around his house and trying to do four circuits a day. That would amount to 400 metres a day, and in 22 days, starting on 1 June, he hopes to complete 90 circuits, walking a total of nine kilometres. You are invited to sponsor Frederick’s walk to raise much-needed funds for ACAS, St. Alban’s organisation for charitable work. At present ACAS is supporting agencies in Strasbourg looking after refugees, an Anglican community in Madagascar much battered by hurricanes and students at a Christian school in Pakistan.

For further details about how to sponsor Frederick’s walk follow this link.  All contributions are welcome! 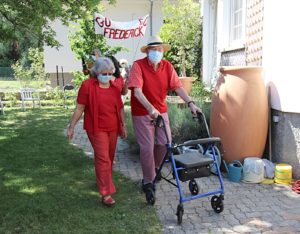 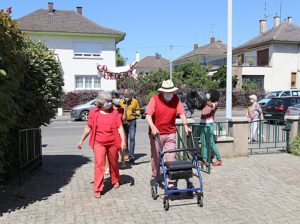 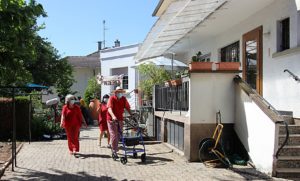 Getting off to a good start with plenty of support.

Last Sunday 1st March these church members were elected to the following offices:

Thanks to all who helped prepare this year’s AGM, provide food, set-up, clean-up, etc. Reports were heard by the Priest-in-Charge and about various activities throughout the life of the Chaplaincy. The 2019 Financial Report was approved and the Budget for 2020 received. Please look for a detailedreport of the 2020 AGM at a future date.

Unfortunately this weekend retreat has had to be postponed.  The Very Reverend Michael Sadgrove, Dean Emeritus of Durham Cathedral, who was going to lead us though some enriching Bible studies on the theme of “Exile”, has been advised not to come, in view of certain underlying health conditions and the spread of the coronavirus.  We hope very much that he can come later in the year.

As we prepare for St. Alban’s Annual General Meeting on Sunday 1 March after church, this is a reminder that your name needs to be on the Electoral Roll if you want to be able to vote at the AGM.  Please check the list on the notice board at the back of the church, and if you’d like to have your name added to the roll you’ll find the appropriate form there as well.

At the meeting two Churchwardens will be elected, two representatives of St. Alban for the Archdeaconry Synod of France, and the members of the Church Council.  If you wish to run for election your nomination must be submitted in advance.  See Fr. Mark for information about how to do that.

The AGM is a good opportunity to find out more about the activities of the church and to share ideas about the future of St. Alban’s.  Here are reports from the 2019 meetings of the French Archdeaconry Synod and of the Diocesan Synod.